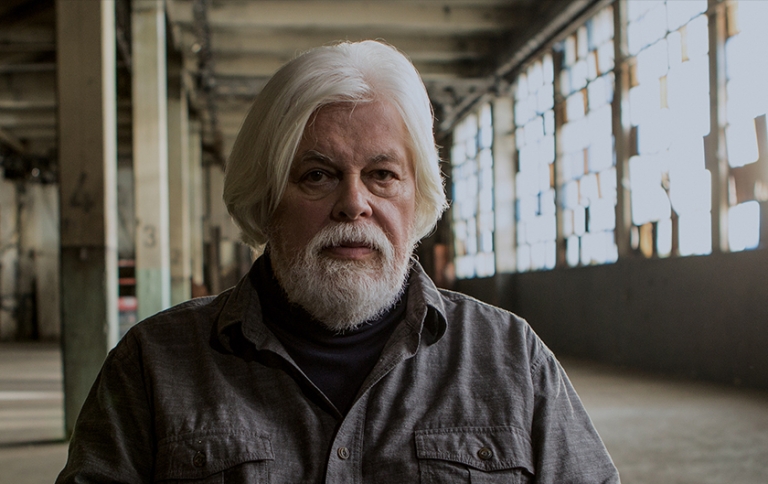 (New York, NY) – Animal Planet announced the acquisition of worldwide television rights to Participant and Terra Mater Factual Studios’ documentary film WATSON, which chronicles Sea Shepherd founder Captain Paul Watson, who has spent his life sailing the globe to keep our oceans and their inhabitants safe.  WATSON had its World Premiere at the 2019 Tribeca Film Festival, where it was runner-up for the Documentary Audience Award. Additional screenings this year will include Zurich Film Festival, Hamptons International Film Festival and Jackson Hole Wildlife Film Festival, among others. WATSON premieres on Animal Planet later this year. The film will open in select U.S. theaters this fall.

Captain Watson and his crews have confronted whaling vessels from Europe to the Southern Ocean, seal hunters in Canada, and shark finners in Central America. WATSON blends revealing contemporary interviews with Captain Watson, archival clips of Sea Shepherd’s dramatic encounters, and spectacular underwater nature footage, as award-winning documentarian Lesley Chilcott (An Inconvenient Truth, Waiting for “Superman”) paints a fascinating portrait of a man willing to put his own life at risk in a relentless quest to protect the oceans and the marine life within.

Animal Planet is home to the popular Primetime Emmy Award® nominated series, Whale Wars (2008-2015), which followed Captain Watson and members of his Sea Shepherd Conservation Society, available to U.S. audiences via the Animal Planet GO app. The Academy of Television Arts and Sciences recognized Whale Wars in 2009 for exploring issues of concern to our society in a compelling, emotional and insightful way by bestowing the series with a Television Academy Honor, which identifies it as "television with a conscience." Captain Watson commented: “I am incredibly proud of this wonderful film by Lesley Chilcott, and I hope that it inspires people to be passionate about caring for and fighting to save our home — the planet Ocean.”

Chilcott added: “WATSON begins and ends with the heroic and fierce commitment of Captain Paul Watson, a man who I have long admired and whose deeds to better the Earth affect us all. I am excited to partner with Animal Planet, which given their connection to Paul and the Sea Shepherd Conservation Society, is the very best home for this film in helping educate and inspire audiences to join them in the fight to save our oceans.”

“Animal Planet has partnered with Paul Watson and Sea Shepherd for many years to shine a light on their incredibly important work on behalf of our oceans. We are therefore all the more delighted to share this beautifully made film chronicling his remarkable, courageous life with our global audiences,” said Susanna Dinnage, Global President of Animal Planet.

“WATSON is a captivating experience from Lesley Chilcott, an incredibly committed filmmaker and environmentalist,” said Diane Weyermann, Chief Content Officer for Participant. “The film delivers a unique look at the larger-than-life character of Captain Paul Watson, whose life and mission gives new dimensions to what it means to be an activist.”

“Terra Mater Factual Studios’ mission is to produce films that drive change frame-by-frame,” said Walter Köhler, CEO and Founder of Terra Mater Factual Studios. “Previous films,The Ivory Game, shortlisted for the Oscars, and Sundance Audience Award winner, Sea of Shadows, have shown our commitment to highlight current environmental crimes and to inspire people to take care of our planet. We are very delighted to have partnered with Participant to produce this engaging biopic of Paul Watson and to show to the world not only the activist, but the poet and philosopher Paul Watson, who has a message for the world that needs spreading wide and far.”

The deal was negotiated by Josh Braun of Submarine on behalf of Participant and Terra Mater Factual Studios, as well as Danice Woodley, SVP of Business and Legal Affairs for Participant, and Krista Wegener, Participant’s EVP of Sales and Distribution.