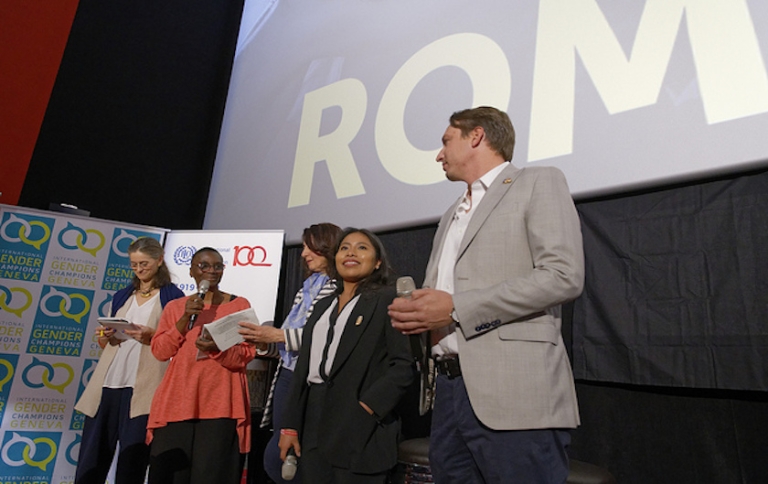 GENEVA (March 6, 2019) – Today, it was announced that Yalitza Aparicio, the Oscar®-nominated star of three-time Academy Award®-winning film ROMA, will make a special appearance during the International Labour Organization (ILO) centenary celebration at its headquarters in Geneva. The event kicks off March 7 with a free screening of Oscar® winner Alfonso Cuarón’s ROMA, followed by a panel discussion with Aparicio, Marcelina Bautista, Secretary-General of Mexico’s National Union of Workers and Domestic Workers, and Claire Hobden, ILO Technical Officer on Vulnerable Workers.

In addition to the screening, Aparicio will take part in the ILO’s International Women’s Day celebration held on March 8. Titled, “A Quantum Leap for Gender Equality: For a Better Future of Work for All,” the event will include Aparicio as the featured speaker offering insights into her personal experiences as an indigenous woman, as well as her work experiences as an educator and actress. Aparicio will be part of a high-level conversation, moderated by journalist Femi Oke, that also will include Guy Ryder, Director General of the ILO, and public and private sector leaders on gender and the world of work and entertainment.

The conversation will be webcast and can be seen live here.

ROMA, produced by Participant Media and Esperanto Filmoj and released by Netflix, follows Cleo (played by Aparicio) a young indigenous domestic worker for a family in the middle-class neighborhood of Roma in Mexico City. Cuarón draws on his own childhood to create a vivid and emotional portrait of domestic strife and social hierarchy amidst political turmoil of the 1970s.

ROMA’s integration at the ILO is part of an overall social impact campaign from Participant, in partnership with the National Domestic Workers Alliance (NDWA) in the U.S., and Centro de Apoyo y Capacitación para Empleadas del Hogar (CACEH) and Semillas in Mexico, to encourage ROMA audiences to be part of the solution in bringing dignity and respect to domestic workers across the U.S. and Mexico.

The free screening is being organized in partnership with Cine-ONU and will be open to the public on a first-come, first-served basis. The screening will be held at Cinerama Empire, Rue de Carouge 72, Geneva, beginning at 7 p.m.

The ILO International Women’s Day celebration will take place from 11 a.m. to 2 p.m. in the ILO Governing Body room.