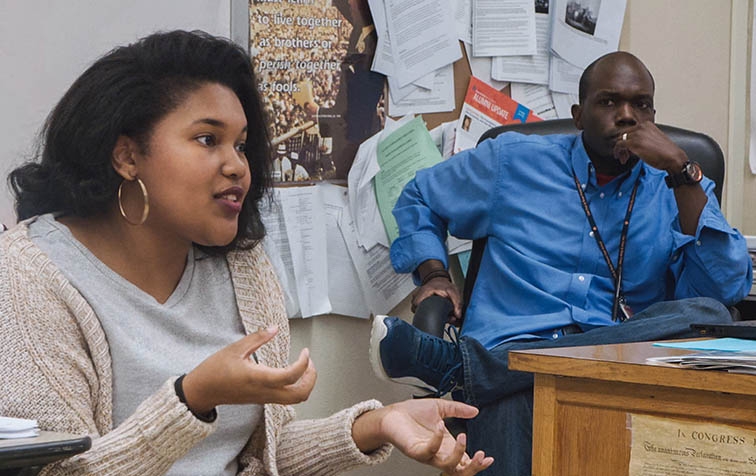 Santa Monica, CA (August 24, 2018) – Today Participant Media and Starz, a Lionsgate Company (NYSE: LGF.A, LGF.B), launched the nationwide civic engagement and educational outreach campaign tied to the release of the upcoming acclaimed 10-part docuseries “America to Me,” from Emmy Award®-winning and Oscar®-nominated filmmaker Steve James (Hoop Dreams, The Interrupters, Life Itself, Abacus: Small Enough to Jail). The 10-city program kicks off in Atlanta at the Center for Civil and Human Rights and rolls out over the course of 10 weeks, with the goal of sparking thousands of conversations in communities across the nation about race and equity highlighted by the series. “America to Me” will premiere on Sunday, August 26 at 10 PM ET/PT on STARZ.

Alongside the release of each new episode, the campaign – called America to Me: Real Talk – brings together a broad cross-section of influencers, stakeholders, educators, students, parents and advocates for a high-profile screening event in each city every week to encourage candid conversations about racial disparity and equality.

“’America to Me’ has been such a seminal moment in my personal and professional life as an opportunity to help educate and change mindsets, including my own, about race and education in America today,” said Steve James, director of “America to Me.” “I am so encouraged by this campaign and am proud to be working with Participant Media and Starz in sparking a nationwide conversation and bringing greater awareness to this vital topic for so many.”

Accompanying the campaign will be a downloadable Community Conversation Toolkit, which will include discussion guides for each episode, as well as immersive activities – all aimed at equipping participants with the tools to identify, address and create solutions to structural inequalities and the ‘opportunity gap’ within their own schools and communities. The campaign is signing up discussion group leaders to host these conversations and lead the change they want to see.

“The conversation about race and equity in education across America today could not be more timely,” said Holly Gordon, Chief Impact Officer for Participant Media. “We are so pleased to be partnering with leaders in cities across America to spark dialogue, challenge assumptions, and imagine a path forward to a more perfect and equal America.”

“America to Me” follows students, teachers and administrators in suburban Chicago’s Oak Park and River Forest High School (OPRF), one of the country’s highest performing and diverse public schools, over the course of a year, as they grapple with decades-long racial and educational inequities — in addition to the challenges that today’s teenagers face. Digging deep into the experiences of a racially diverse student population, “America to Me” sparks candid conversations about what has succeeded and what has failed in the quest to achieve racial equity and overcome obstacles in our education system.

Joining filmmakers and subjects from the series are speakers including former Mayor of Atlanta Shirley Jones and former Secretary of Education John King.

“America to Me” made its world premiere with the first five episodes at the 2018 Sundance Film Festival in the new “Indie Episodic” category. Episodes were also previewed at Full Frame and AFI DOCS.

For more information on “America to Me” and access to press materials and show assets, please visit the STARZ Media Room, compatible with iPad devices: https://mediaroom.starz.com

“America to Me” Online