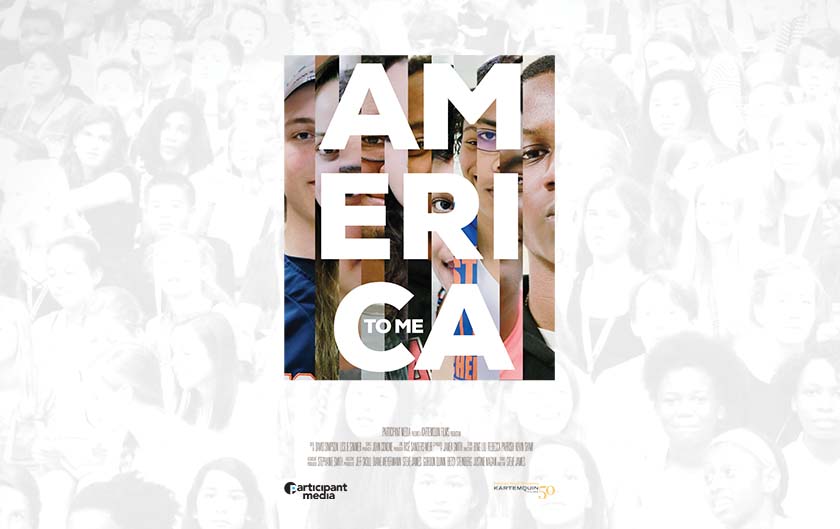 “America To Me” follows students, teachers and administrators in suburban Chicago’s Oak Park and River Forest High School, one of the country’s most exemplary and diverse public schools, over the course of a year as they grapple with decades-long racial and educational inequities – in addition to the challenges that today’s teenagers face. Digging deep into the experiences of a racially diverse student population, “America to Me” sparks extremely candid conversations about what has succeeded and what has failed in the quest to achieve racial equality and overcome bias in our education system. Part observational character story and part high school confessional, James captures critical moments within this vibrant high school ecosystem.

“We are thrilled to acquire this compelling docuseries from Participant Media and Steve James who, as a filmmaker, is truly one of the best,” said President of Programming for Starz Carmi Zlotnik. “’America to Me’ is extremely socially relevant and timely which exemplifies our diversity strategy. Steve’s ability to bring the real and honest portrait of these students and the complex and compelling issues they face through this series is admirable.”

Participant’s CEO David Linde said, “As Participant continues to expand its global footprint with exciting new content opportunities, we are thrilled to announce this distribution partnership with Starz bringing ‘America to Me,’ our first documentary television series, to audiences everywhere.”

The docuseries will premiere in Fall 2018 on STARZ and will also be available for download or streaming via the STARZ app which offers subscribers access to more than 7,000 selections including STARZ Originals “Power,” “Outlander,” “American Gods,” “Counterpart,” among others; as well as movies and television series.

“America to Me” is Participant Media’s first unscripted series which aligns with the company’s overall mission of telling compelling and impactful stories across multiple platforms. The series and accompanying social impact campaign aim to spark and guide a national conversation around race, education, opportunity and agency.

“In creating ‘America to Me,’ we were encouraged every day by the kids and their families, some truly dedicated teachers, and so many others featured in the series. Their passion and insights inspired us and we believe their stories will resonate with people everywhere,” said James. “I am so excited to have found a distribution partner in Starz that shares the same dedication we have for this series and will help it finds its way into the world.”

“Steve and his incredible team of field directors have created a series with extraordinary intimacy that shows the complexities and nuances of being a teenager in an American high school,” said Diane Weyermann, President of Documentary Film and Television for Participant Media. “We are thrilled to partner with Starz and look forward to audiences falling in love with ‘America to Me’ just as we have.”

Kartemquin Films received a grant from the John D. and Catherine T. MacArthur Foundation to contribute to the production of the docuseries.

“America to Me” made its world premiere with the first five episodes at the 2018 Sundance Film Festival in the new “Indie Episodic” category.

Vice President of Original Programming Patrick McDonald is the Starz executive overseeing this docuseries. Negotiations were brokered by Brett Marottoli, Head of Program Acquisitions for Starz, along with Gabriel Brakin and Krista Wegener for Participant and Endeavor Content on behalf of Participant/Kartemquin.

“America to Me” docuseries is part of the previously announced unscripted programming added to the larger portfolio of STARZ Originals including the docuseries “Wrong Man,” “Warriors of Liberty City,” “In Fashion” and “The Field.”

Kartemquin Films is a collaborative community empowering documentary media makers who create stories that foster a more engaged and just society. In 2016, Kartemquin celebrated 50 years of sparking democracy through documentary. The organization has won several major critical and journalistic prizes, including multiple Emmy, Peabody, duPont-Columbia and Robert F. Kennedy journalism awards, Independent Spirit, IDA, PGA and DGA awards, and an Oscar nomination. Kartemquin is recognized as a leading advocate for independent public media, and has helped hundreds of artists via its filmmaker development programs that help further grow the field, such as KTQ Labs, Diverse Voices in Docs, and the acclaimed KTQ Internship.

Kartemquin is a 501(c)3 not-for-profit organization based in Chicago. www.kartemquin.com