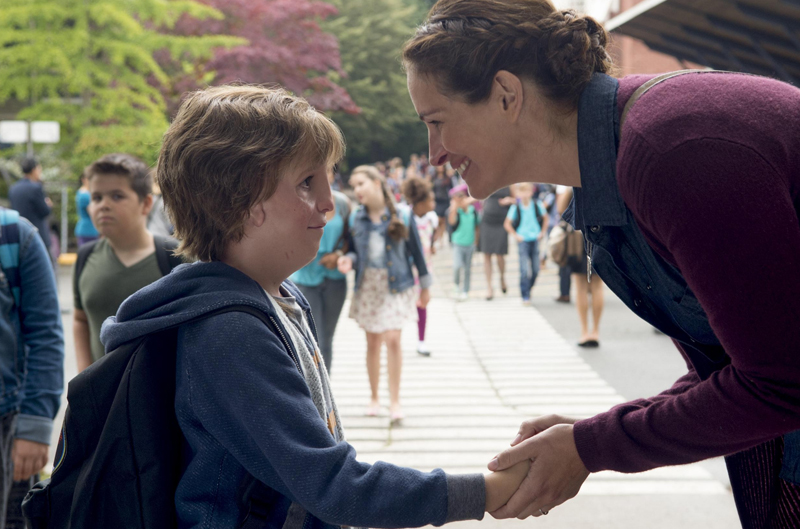 Based on the New York Times bestseller from R.J. Palacio, “Wonder” is an award-winning book that has touched the hearts of children and parents worldwide as it tells the courageous story of young August Pullman. Born with facial differences that, up until now, have prevented him from going to a mainstream school, Auggie becomes the most unlikely of heroes when he enters the local fifth grade.  As his family, his new classmates, and the larger community all struggle to discover their compassion and acceptance, Auggie's extraordinary journey will unite them all and prove you can't blend in when you were born to stand out.

Stephen Chbosky (The Perks of Being a Wallflower) will direct. He adapted the book along with Jack Thorne (Harry Potter and the Cursed Child, A Long Way Down) and Steve Conrad (Unfinished Business). Lionsgate has worldwide distribution rights.

About Lionsgate:
Lionsgate is a premier next generation global content leader with a diversified presence in motion picture production and distribution, television programming and syndication, home entertainment, international distribution and sales, branded channel platforms, interactive ventures and games, and location-based entertainment. The Company has nearly 80 television shows on 40 different networks spanning its primetime production, distribution and syndication businesses. These include the critically-acclaimed hit series Orange is the New Black, the beloved drama series Nashville, the syndication successes The Wendy Williams Show and Celebrity Name Game (with FremantleMedia), the breakout series The Royals and the Golden Globe-nominated dramedy Casual.

Lionsgate's home entertainment business is an industry leader in box office-to-DVD and box office-to-VOD revenue conversion rates.  Lionsgate handles a prestigious and prolific library of approximately 16,000 motion picture and television titles that is an important source of recurring revenue and serves as a foundation for the growth of the Company's core businesses. The Lionsgate and Summit brands remain synonymous with original, daring, quality entertainment in markets around the world. www.lionsgate.com

About Participant Media:
Participant Media (http://www.participantmedia.com/) is a leading media company dedicated to entertainment that inspires and compels social change. Founded in 2004 by Jeff Skoll, Participant combines the power of a good story well told with opportunities for viewers to get involved. Participant’s more than 70 films, including Spotlight, Contagion, Lincoln, The Help, He Named Me Malala, The Look of Silence, CITIZENFOUR, Food, Inc., and An Inconvenient Truth, have collectively earned 50 Academy Award® nominations and 11 wins, including Best Picture for Spotlight. Participant has also launched more than a dozen original series, including “Please Like Me,” Emmy® Award-winning “Hit Record On TV with Joseph Gordon-Levitt,” and “Fortitude,” for its television network, Pivot (http://www.pivot.tv/). Participant's digital hub, TakePart (http://www.TakePart.com), serves millions of socially conscious consumers each month with daily articles, videos and opportunities to take action. Follow Participant Media on Twitter at @Participant and on Facebook.

About Walden Media:
Walden Media specializes in entertainment for the whole family, creating movies, books and television series that spark the imagination and delight all generations. A subsidiary of the Anschutz Film Group, Walden Media movies include adaptations of notable books, compelling biographies and thrilling accounts of historical events. The company’s films are entertaining and commercial, while also telling stories that are inspirational, aspirational and explorational. Past award-winning films include: “The Chronicles of Narnia” series, the “Journey to the Center of the Earth” series, “Nim’s Island,” “Charlotte’s Web,” “Bridge to Terabithia,” “Holes,” “Amazing Grace,” and the Sundance Audience Prize Winning documentary “Waiting for ‘Superman.”