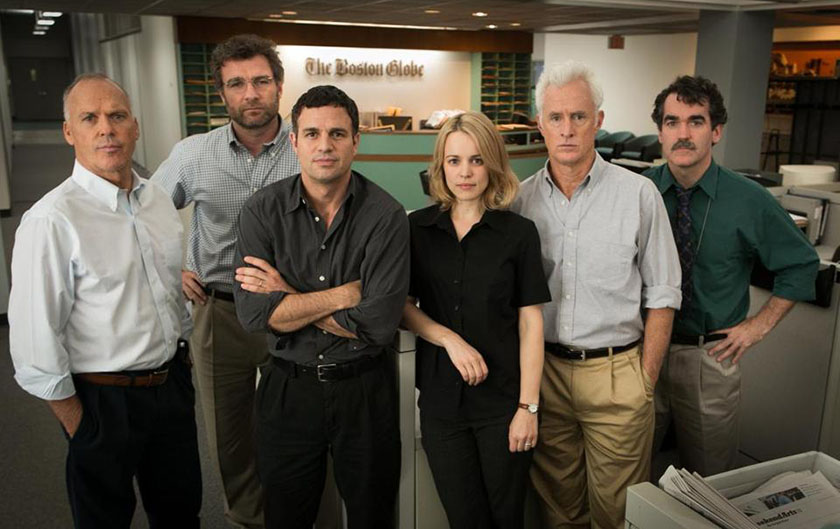 LOS ANGELES (June 23, 2015) – The Boston Globe, Participant Media, First Look Media and Open Road Films announced today they would extend The Spotlight Investigative Journalism Fellowship again next year to continue supporting the important and necessary work of investigative journalists. The $100,000 fellowship funded by Participant, First Look, and Open Road, similar to this year’s program, will provide resources, support and guidance from the Globe’s editorial team to journalists in their investigation.

Additionally, as previously announced at the 2016 Investigative Reporters & Editors (IRE) Conference, Kelly Carr and Jaimi Dowdell are this year’s fellowship recipients to pursue an in-depth investigative story to be published in The Boston Globe.

Jaimi Dowdell is the senior trainer for Investigative Reporters and Editors (IRE), teaching journalists around the world the art of computer-assisted reporting. Kelly Carr, a freelance journalist, was part of the International Consortium of Investigative Journalists (ICIJ) team that wrote the influential “Lux Leaks” reports in 2014, showing how powerful companies cut secret deals to save billions in taxes.

The Boston Globe’s Spotlight editor Scott Allen said, “Jaimi Dowdell and Kelly Carr are exactly the type of journalists we wanted to support when we launched the Spotlight Fellowship. They’re passionate reporters with a great idea for an investigation, but they needed some support to bring it to life. We’re proud to be that support. And we’re delighted to team up with our partners to offer the fellowship again in 2017.”

Participant CEO David Linde added, “The work of the Boston Globe’s Spotlight team has changed history and impacted many lives. We believe it’s important to continue supporting the legacy and vital work of investigative journalists everywhere, we’re excited to partner with our friends at the Globe, First Look and Open Road to continue the Spotlight Investigative Journalism Fellowship for another year.”

Michael Bloom, President, First Look Media, added, “We are thrilled to continue our support for the Spotlight Investigative Journalism Fellowship, which could not be more in line with our company mission.  We’re honored to do this in partnership with Participant Media, Open Road Films and The Boston Globe, our great partners on Spotlight.”

Jaimi and Kelly’s winning proposal was selected by a judging committee out of a competitive field of over 80 submissions from journalists all over the country, including many who have worked for major media organizations. The selection committee was comprised of The Boston Globe’s current Spotlight Editor Scott Allen; the Globe’s Editor-at-Large Walter “Robby” Robinson; previous Spotlight Editor Tom Farragher, who is currently a columnist and associate editor at the Globe; Margaret “Peggy” Engel, executive director at the Alicia Patterson Journalism Foundation; and Betsy Reed, editor-in-chief of The Intercept.

The fellowship was inspired by The Boston Globe Spotlight Team’s Pulitzer Prize-winning coverage of sexual abuse in the Catholic Church as portrayed in the Oscar® winning film Spotlight.

Submissions for the 2017 fellowship will open later this year, please visit www.spotlightfellowship.com for additional details.

About The Boston Globe
The Boston Globe is New England's foremost regional news source dedicated to providing in-depth coverage in breaking news, sports, business, lifestyle, and arts. With a mission to provide truth and accountability, both in print and on BostonGlobe.com, the Globe is the epitome of premium journalism, winning 24 Pulitzer Prizes over the past 50 years.

About First Look Media
First Look Media is a new-model media company devoted to supporting independent voices across all platforms, from investigative journalism and documentary filmmaking to smart, provocative entertainment.  Launched in 2013 by eBay founder and philanthropist Pierre Omidyar with the belief that independent perspectives are vital to a vibrant culture and thriving democracy.  First Look operates as both a studio and digital media company.