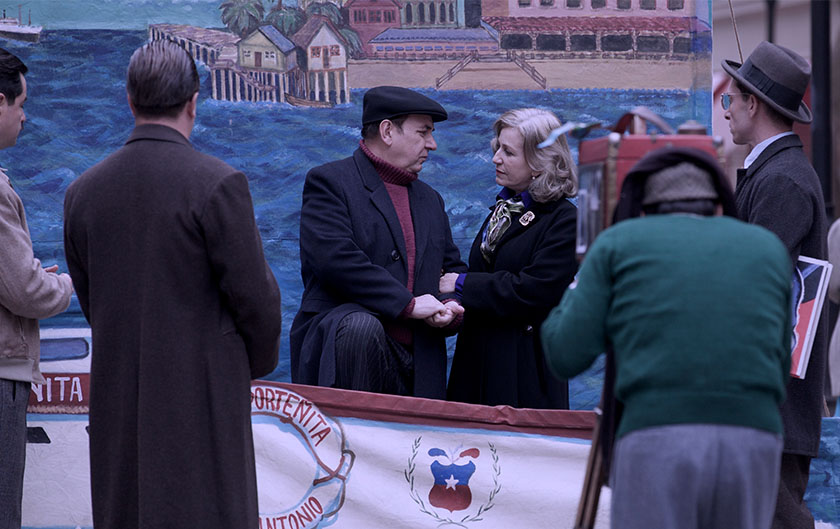 Cannes – May 14, 2016 – The Orchard has acquired all North American distribution rights from Participant Media to director Pablo Larraín’s NERUDA, which premiered yesterday in Cannes in the lauded Directors' Fortnight section. The Orchard plans a fall release for the film with an awards push.

Larraín was last in Cannes with No, which went on to be nominated for the Academy Award® for Best Foreign Language Film. Written by Guillermo Calderon, NERUDA stars Gael Garcia Bernal, Chile’s Luis Gnecco (HBO’s “Profugos”), and Mercedes Moran (The Motorcycle Diaries), and is produced by Juan de Dios Larraín.

It’s 1948 and the Cold War has reached Chile. In congress, Senator Pablo Neruda accuses the government of betrayal and is swiftly impeached by President Videla. Police Prefect Óscar Peluchonneau is assigned to arrest the poet. Neruda tries to flee the country with his wife Delia del Carril, but they are forced into hiding. In the struggle with his nemesis Peluchonneau, Neruda sees an opportunity to reinvent himself. He plays with the Prefect, leaving clues designed to make their game of cat-and-mouse more dangerous, more intimate. In this story of persecution, Neruda recognizes his own heroic possibilities: a chance to become both a symbol for liberty and a literary legend.

The deal was negotiated by The Orchard with CAA and Participant Media on behalf of the filmmakers. Pablo Larraín is represented by Management 360 and CAA.

"Neruda blew us away, full stop.  Pablo has created a lush, layered film of beauty filled with amazing performances and a style so unique and compelling," said Paul Davidson, EVP of Film and TV at The Orchard. "We are ecstatic to have the opportunity to be a part of this film's journey to audiences and work with Pablo and our good friends at Participant."

"Pablo has made another extraordinary film that grapples with art, politics and love in a way that defies all expectations. We are incredibly proud of our continuing partnership with our friends Pablo and Juan. Paul and his team at The Orchard stepped up immediately after our first screening, and we are confident they will deliver the film to the widest possible audience," said Jonathan King, EVP of Narrative Films at Participant Media.

The Orchard will also release Participant Media’s THE MUSIC OF STRANGERS: YO-YO MA AND THE SILK ROAD ENSEMBLE in early June.

The Orchard is a pioneering independent film, TV and music distribution company that operates in over 25 global markets. The company, founded as a music distributor in 1997, is a groundbreaking leader in the film and television distribution space, known for its innovative technology that provides filmmakers with up-to-the minute trending data and analytics on their projects. The Orchard's film division has enjoyed such recent successes as the Academy Award-nominated documentary "Cartel Land," "The Overnight," "Dior & I" and "What We Do in the Shadows." Upcoming releases include Academy Award-winner Morgan Neville's "The Music of Strangers,” Taika Waititi’s “The Hunt for the Wilderpeople,” Roger Ross Williams’ “Life, Animated” and Antonio Campos’ “Christine.” The company is currently in theaters with Joachim Trier's "Louder Than Bombs.” For more information on The Orchard, please visit www.theorchard.com.

Participant Media (http://www.participantmedia.com/) is a leading media company dedicated to entertainment that inspires and compels social change. Founded in 2004 by Jeff Skoll, Participant combines the power of a good story well told with opportunities for viewers to get involved. Participant’s more than 70 films, including Spotlight, Contagion, Lincoln, The Help, He Named Me Malala, The Look of Silence, CITIZENFOUR, Food, Inc., and An Inconvenient Truth, have collectively earned 50 Academy Award® nominations and 11 wins, including Best Picture for Spotlight. Participant has also launched more than a dozen original series, including “Please Like Me,” Emmy® Award-winning “Hit Record On TV with Joseph Gordon-Levitt,” and “Fortitude,” for its television network, Pivot (http://www.pivot.tv/). Participant's digital hub, TakePart (http://www.TakePart.com), serves millions of socially conscious consumers each month with daily articles, videos and opportunities to take action. Follow Participant Media on Twitter at @Participant and on Facebook.