‘That Which I Love Destroys Me,’ A Documentary Spotlighting PTSD Among Vets Is Now Available Free On Demand At Takepart.Com

‘That Which I Love Destroys Me,’ A Documentary Spotlighting PTSD Among Vets Is Now Available Free On Demand At Takepart.Com 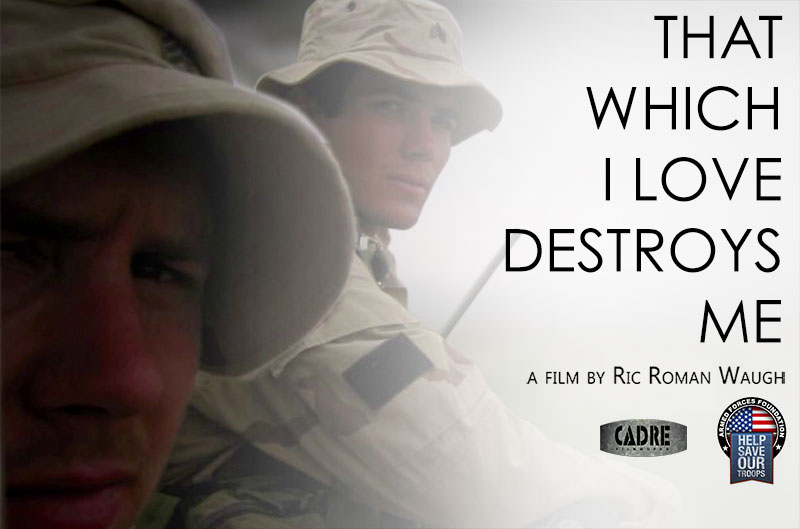 LOS ANGELES (March 2, 2015) – Participant Media’s digital magazine and social action platform for the conscious consumer TakePart.com, today announced that Ric Roman Waugh’s powerful documentary That Which I Love Destroys Me is available on demand at no cost throughout March at http://www.TakePart.com/vets. Viewers will have the opportunity to show support and make a donation in any amount to the Armed Forces Foundation via TakePart's donation tool (powered by CrowdRise). Viewers will also be able to take action via TakePart’s Take Action Platform on other vets-related issues, at http://www.TakePart.com/return-the-service.

The documentary offers a candid look at the current epidemic of PTSD through the eyes of two Special Operations veterans –Tyler Grey and Jayson Floyd – and its effects on their daily lives, impact on their family and friends, and how they are facing and overcoming the unseen scars of war.

To help raise awareness about the issue within the armed forces community, TakePart.com has enlisted the support of Military.com, the largest veteran and military organization with 10 million members and a belief that benefits available to service members should be easier to access. The documentary will also be available on Military.com throughout March.

“A U.S. veteran commits suicide every 65 minutes,” said Karina Kogan, EVP of digital for TakePart.com. “This, among other shocking statistics, makes it important to share Jayson’s and Tyler’s stories with the TakePart and Military.com communities, along with providing meaningful opportunities for viewers to take action to support our vets.”

“We are proud to collaborate with TakePart on streaming this powerful film that documents the reintegration of these two soldiers who have fought for our country and paid a terrible price for it,” said Greg Smith, President of Military.com. Smith, who is a retired Navy admiral and served combat tours in Iraq and Afghanistan, went on to say, “It is thought provoking to see firsthand what it really takes to come home from war, and I think this film will lead to more understanding and better support for the warriors who have done so very much on our behalf.”

Director Ric Roman Waugh notes, “Right now PTSD is something people are talking about across the nation. It’s my hope that through Tyler’s and Jayson’s very personal stories, we can focus the attention on the physical and mental needs of our returning veterans, and spur citizens and lawmakers to look for ways to ensure these brave warriors are supported at home.“

The documentary is a part of Participant Media’s yearlong, multiplatform initiative Return the Service that celebrates the bravery, resilience and contributions of our armed service men and women, while taking an in-depth look at the challenges they face upon returning home. The initiative also offers viewers avenues to take action to address important issues facing veterans.

That Which I Love Destroys Me is directed by Ric Roman Waugh, produced by Waugh, Patricia Driscoll, Jonathan Chibnall, and Dana Gonzales; and funded by the Armed Forces Foundation.

For more information on That Which I Love Destroys Me, the Return the Service campaign, and how you can take part, please visit: www.takepart.com/vets.