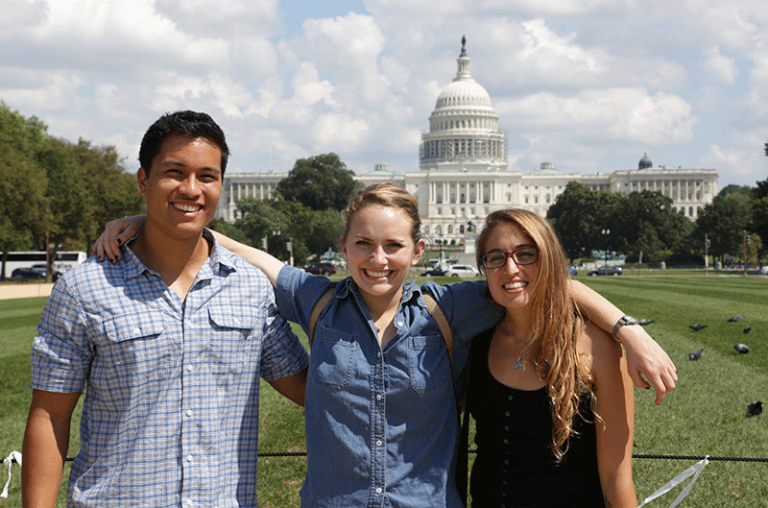 LOS ANGELES (March 2, 2015) – Participant Media and its TEACH campaign teamed up with Roadtrip Nation over the summer to capture The Road to TEACH, a cross-country adventure spotlighting inspiring individuals working to change the face of education. The hour-long documentary, which is scheduled to air on Participant Media’s television network Pivot on March 18, has been selected to premiere at SXSWedu on March 11 at Alamo Drafthouse Cinema in Austin. The SXSWedu Conference & Festival promotes innovation in learning through the avenue of creative arts.

“Roadtrip Nation is thrilled that our work with Participant Media and the TEACH Campaign will be recognized at SXSWedu. There is perhaps no better place to premiere The Road to TEACH than at a pinnacle conference which celebrates the power and impact of education,” said Roadtrip Nation cofounder, Mike Marriner.

“The Road to TEACH celebrates the inspiring journey of three students speaking with leading voices in education from around the country,” said Chad Boettcher, EVP Social Action and Advocacy for Participant Media. ”We’re proud to premiere the documentary at the festival.”

Following a five-week cross-country journey that takes place on Roadtrip Nation’s iconic green RV, The Road to TEACH features three student road-trippers: Nadia, Rafael, and Grace, who stop in various cities around the country to interview a diverse range of influential professionals. The three sat down with leading voices such as Arne Duncan, Secretary of Education; Kelly Meyer, creator of the American Heart Association's Teaching Gardens; Charles Best, founder of DonorsChoose; Robert Florio, veteran and special education teacher with Troops to Teachers, and many more.

As the road-trippers explore the eclectic world of education, they also contemplate their futures and begin to understand the vast opportunities, personal rewards, and vital need for passionate young people to make a commitment to teach the next generation.

The film encourages viewers to reassess conventional perceptions of the field of education by highlighting rare insights from teachers, policymakers, and activists. It also leaves students with the message that teaching is not only a vocation but also a strategic tool to enhance social justice across the nation.

The film’s premiere will take place at the Alamo Drafthouse Cinema on March 11.  The Road to TEACH will also air on Pivot on March 18, and will be available live and on-demand through the Pivot TV app. Additionally, the insights from interviews will be accessible to thousands of students through Roadtrip Nation’s career exploration curriculum and online multimedia resources, reaching over 6,000 schools and representing five million young people across the country – continuously inspiring viewers to explore different careers.

Participant Media (http://www.ParticipantMedia.com) is a global entertainment company founded in 2004 by Jeff Skoll to focus on feature film, television, publishing and digital content that inspires social change. Participant's more than 60 films include Good Night, and Good Luck, Syriana, An Inconvenient Truth, Food, Inc., Waiting for ‘Superman’, The Help, Contagion and Lincoln. Participant launches campaigns that bring together government entities, foundations, schools, and others to raise awareness and drive people to take action on issues from each film or television show. Pivot (http://www.Pivot.tv), the company’s television network, is available in over 47 million homes, with a diverse slate of talent and a mix of original series, acquired programming, films and documentaries. TakePart (http://www.TakePart.com) is Participant’s digital news and lifestyle magazine and social action platform for the conscious consumer. Through its films, social action campaigns, digital network, and its television network, Participant seeks to entertain, encourage and empower every individual to take action.

The SXSWedu® Conference & Festival fosters innovation in learning by hosting a diverse and energetic community of stakeholders from a variety of backgrounds in education. The four-day event affords registrants open access to engaging sessions, interactive workshops, hands on learning experiences, cinematic portrayals, early stage startups and a host of networking opportunities. By providing a platform for collaboration, SXSWedu works to promote creativity and social change.