Participant Media, Omidyar Network, and The Poynter Institute Launch New Campaign Against Misinformation Inspired by the Film 'Merchants of Doubt'

Participant Media, Omidyar Network, and The Poynter Institute Launch New Campaign Against Misinformation Inspired by the Film 'Merchants of Doubt' 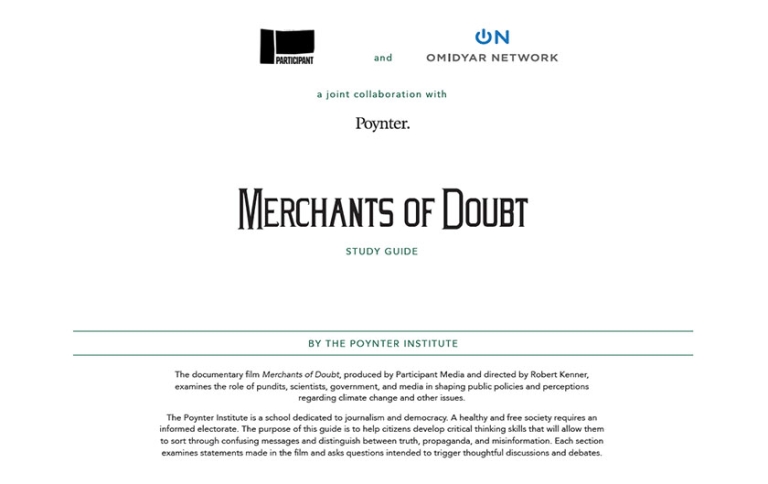 NEW YORK / LOS ANGELES / ST. PETERSBERG, FL (March 2, 2015) – Inspired by the new documentary “Merchants of Doubt”, Participant Media, Omidyar Network, and The Poynter Institute are collaborating on a national program to help journalists, educators and students learn how to identify misinformation aimed at distorting scientific truth and influencing public policy in the United States. Representatives from Poynter will introduce the program, including a curriculum aimed at journalism students, at a screening of “Merchants of  Doubt” tonight at New York’s Columbia Journalism School, hosted with Columbia Journalism Review (CJR).

In the new film “Merchants of Doubt”, inspired by the acclaimed book by Naomi Oreskes and Erik Conway, filmmaker Robert Kenner (“Food, Inc.”) lifts the curtain on a secretive group of charismatic pundits-for-hire who present themselves in the media as scientific authorities – yet have the contrary aim of spreading confusion about public threats ranging from toxic chemicals to pharmaceuticals to climate change.

Poynter’s curriculum is designed to help journalists report accurately and authoritatively on science and hold companies and individuals responsible for their actions. Poynter has also developed classroom guides to assist teachers and students as they explore the skills of news literacy and develop an appreciation of critical journalism in democratic societies. The training will be offered in a variety of forms, including in-person workshops and on the Institute’s e-learning platform News University. More information is available at www.takepart.com/doubt.

Chad Boettcher, Participant’s Executive Vice President, Social Action & Advocacy added, “For decades, industries like tobacco, chemicals, and fossil fuels have employed spin doctors to cast doubt on inconvenient science that showed how damaging their products were to human health or the environment. Their success delayed public action on some of the most dangerous and pressing issues of our time. At Participant, we see the release of ‘Merchants of  Doubt’ as an opportunity to inspire consumers to demand more information and more transparency about these issues in the media. We are proud to work with Poynter to help journalism students avoid the trap of spreading misinformation.”

“Journalists and citizens must both get smarter at vetting scientific information because a small number of powerful corporations have become quite sophisticated in their efforts to distort the truth,” said Kelly McBride, Poynter’s vice president of academic programs. “We at Poynter jumped at the chance to join this project because we believe that well-informed citizens are capable of holding private corporations accountable and encouraging their government to serve the greater good.”

Commenting on the campaign, Director Robert Kenner said, “The media looks at climate change like it's a debate – but there's no debate at all here.  The theory of climate change is as solid as the theory of gravity.  The only question now is what can we do to solve this, but as long as these merchants of doubt are being treated like experts, we're never going to see things change.”

“Merchants of  Doubt” is presented by Sony Pictures Classics, in association with Participant Media and Omidyar Network, a film by Kenner, produced by Kenner and Melissa Robledo, executive produced by Jeff Skoll and Diane Weyermann of Participant Media, and Pierre Omidyar of Omidyar Network, and co-produced by Brian Pearle, Taki Oldham, Dylan Nelson and Youtchi von Lintel. Directors of Photography on the film include Don Lenzer, Barry Berona and Jay Redmond with music by Mark Adler. The film will release theatrically in the U.S. on March 6, 2015. Trailer and more information at http://www.takepart.com/merchants-of-doubt.

About The Poynter Institute

The Poynter Institute for Media Studies is a global leader in journalism education, and a strategy center that stands for uncompromising excellence in journalism, media and 21st century public discourse. Poynter faculty teach seminars and workshops at the Institute in St. Petersburg, Fla., and at conferences and organizational sites around the world. Its e-learning division, News University, www.newsu.org, offers the world’s largest online journalism curriculum in 7 languages, with more than 400 interactive courses and 300,000 registered users in more than 200 countries. The Institute’s website, www.poynter.org, produces 24-hour coverage of news about media, ethics, technology, the business of news and the trends that currently define and redefine journalism news reporting. The world’s top journalists and media innovators come to Poynter to learn and teach new generations of reporters, storytellers, media inventors, designers, visual journalists, documentarians and broadcast producers, and to build public awareness about journalism, media, the First Amendment and protected discourse that serves democracy and the public good.

Omidyar Network is a philanthropic investment firm dedicated to harnessing the power of markets to create opportunity for people to improve their lives. Established in 2004 by eBay founder Pierre Omidyar and his wife Pam, the organization invests in and helps scale innovative organizations to catalyze economic and social change. Omidyar Network has committed more than $730 million to for-profit companies and non-profit organizations that foster economic advancement and encourage individual participation across multiple initiatives, including Consumer Internet & Mobile, Education, Financial Inclusion, Governance & Citizen Engagement, and Property Rights. To learn more, visit www.omidyar.com and follow on Twitter @omidyarnetwork.com.

Participant Media (http://www.ParticipantMedia.com) is a global entertainment company founded in 2004 by Jeff Skoll to focus on feature film, television, publishing and digital content that inspires social change. Participant's more than 60 films include Good Night, and Good Luck, Syriana, An Inconvenient Truth, Food, Inc., Waiting for ‘Superman’, The Help, Contagion and Lincoln. Participant launches campaigns that bring together government entities, foundations, schools, and others to raise awareness and drive people to take action on issues from each film or television show. Pivot (http://www.pivot.tv/), the company’s television network, is available nationally in 50 million homes, with a diverse slate of talent and a mix of original series, acquired programming, films and documentaries. TakePart (http://www.TakePart.com) is Participant’s digital news and lifestyle magazine and social action platform for the conscious consumer. Through its films, social action campaigns, digital network, and its television network, Participant seeks to entertain, encourage and empower every individual to take action.