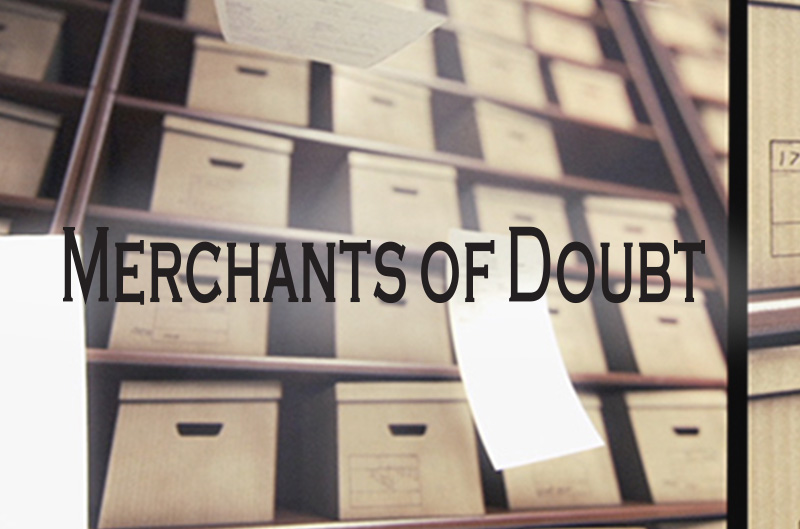 WASHINGTON and LOS ANGELES (March 31, 2015) – Sony Pictures Classics, Participant Media and Omidyar Network, in cooperation with the House Sustainable Energy and Environment Coalition (SEEC) and the Bicameral Task Force on Climate Change will host a special screening of Merchants of Doubt.  The documentary about corporate deception around issues ranging from tobacco to climate change will screen on April 1st, 2015 in the Rayburn House Office Building.

In the new film Merchants of Doubt, inspired by the acclaimed book by Naomi Oreskes and Erik Conway, filmmaker Robert Kenner (Food, Inc.) lifts the curtain on a secretive group of charismatic pundits-for-hire who present themselves in the media as scientific authorities – yet have the contrary aim of spreading confusion about public threats ranging from toxic chemicals to pharmaceuticals to climate change. Film subjects including former U.S. Representative Bob Inglis, and author Naomi Oreskes (“Merchants of Doubt”) will participate in a panel discussion and audience question and answer session following the film.

Director Robert Kenner said, “The media looks at climate change like it's a debate – but there's no debate at all here.  The only question now is what can we do to solve this, but as long as these merchants of doubt are being treated like experts, we're never going to see things change.”

“Merchants of  Doubt” is presented by Sony Pictures Classics, in association with Participant Media and Omidyar Network, a film by Kenner, produced by Kenner and Melissa Robledo, executive produced by Jeff Skoll and Diane Weyermann of Participant Media, and Pierre Omidyar of Omidyar Network, and co-produced by Brian Pearle, Taki Oldham, Dylan Nelson and Youtchi von Lintel. Directors of Photography on the film include Don Lenzer, Barry Berona and Jay Redmond with music by Mark Adler. The film is now in theaters. Trailer and more information at http://sonyclassics.com/merchantsofdoubt/dates.html.

About Omidyar Network
Omidyar Network is a philanthropic investment firm dedicated to harnessing the power of markets to create opportunity for people to improve their lives. Established in 2004 by eBay founder Pierre Omidyar and his wife Pam, the organization invests in and helps scale innovative organizations to catalyze economic and social change. Omidyar Network has committed more than $730 million to for-profit companies and non-profit organizations that foster economic advancement and encourage individual participation across multiple initiatives, including Consumer Internet & Mobile, Education, Financial Inclusion, Governance & Citizen Engagement, and Property Rights. To learn more, visit www.omidyar.com and follow on Twitter @omidyarnetwork.com.

Participant Media (http://www.ParticipantMedia.com) is a global entertainment company founded in 2004 by Jeff Skoll to focus on feature film, television, publishing and digital content that inspires social change. Participant's more than 60 films include Good Night, and Good Luck, Syriana, An Inconvenient Truth, Food, Inc., Waiting for ‘Superman’, The Help, Contagion and Lincoln. Participant launches campaigns that bring together government entities, foundations, schools, and others to raise awareness and drive people to take action on issues from each film or television show. Pivot (http://www.pivot.tv/), the company’s television network, is available nationally in 48 million homes, with a diverse slate of talent and a mix of original series, acquired programming, films and documentaries. TakePart (http://www.TakePart.com) is Participant’s digital news and lifestyle magazine and social action platform for the conscious consumer. Through its films, social action campaigns, digital network, and its television network, Participant seeks to entertain, encourage and empower every individual to take action.

About SEEC and the Bicameral Task Force on Climate Change