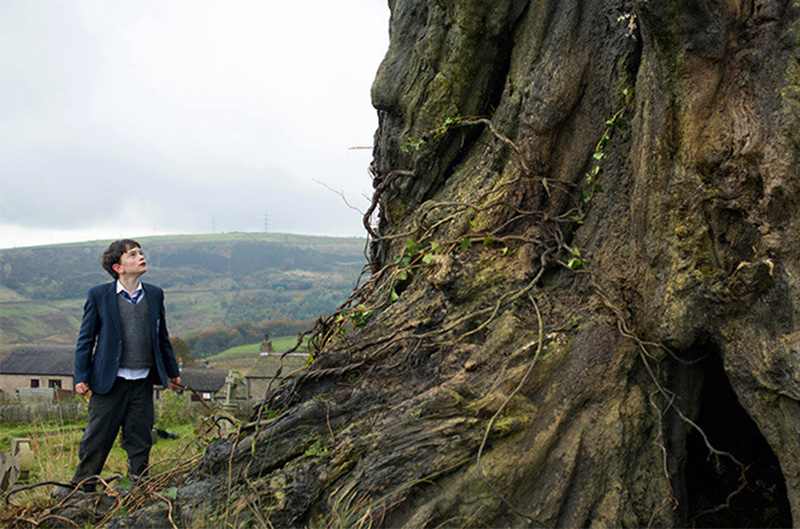 VANCOUVER and SANTA MONICA (September 30, 2014) – Production has begun on A Monster Calls, directed by Juan Antonio Bayona, Goya Award-winning director of the worldwide smash The Impossible. Participant Media and River Road Entertainment are financing the Apaches Entertainment production, in association with Telecinco Cinema and La Trini Films. The film, adapted by Patrick Ness from his award-winning children’s fantasy novel, will be released by Focus Features domestically; Universal Pictures International for its theatrical and home entertainment release in Spain; and Lionsgate (NYSE: LGF) International is handling foreign sales throughout the rest of the world. A Monster Calls is slated for a fall 2016 release.

A Monster Calls is a visually spectacular drama about 12-year-old Conor (newcomer Lewis MacDougall) who attempts to deal with his mother’s (Felicity Jones, who stars in Focus’ fall release The Theory of Everything) illness and the bullying of his classmates by escaping into a fantastical world of monsters and fairy tales that explore courage, loss and faith. The cast also includes Academy Award nominees Liam Neeson, who will star in performance-capture and voiceover as the nocturnally visiting monster of the title, and Sigourney Weaver, who will portray Conor’s maternal grandmother; Toby Kebbell (Dawn of the Planet of the Apes), as Conor’s father; and Geraldine Chaplin, who is making her third movie with Mr. Bayona.

The new film is being produced by Belén Atienza, who was a producer on Mr. Bayona’s The Impossible, released by Lionsgate’s Summit label, and The Orphanage; and an executive producer on Guillermo del Toro’s Pan’s Labyrinth, which won three Academy Awards. Mr. Bayona won a Goya Award, Spain’s Oscars equivalent, for The Impossible, which grossed more than $180 million at the worldwide box office and which earned actress Naomi Watts an Academy Award nomination.

Mr. Ness wrote the novel based on an original idea by the late Siobhan Dowd. Published in almost 30 languages, the novel has won many prestigious prizes worldwide, including the distinguished Carnegie Medal and, for illustrator Jim Kay, the Kate Greenaway Medal.

“A Monster Calls is a beloved and iconic book, and I’m thrilled at the opportunity to create a world of monsters and fantasy that does it justice,” said Mr. Bayona remarked, “I’m also delighted to rejoin much of my creative team from The Impossible, and I couldn’t ask for a more talented and prestigious cast, and a more supportive group of studio partners, to help bring this incredible project to the screen.”

The creative team on A Monster Calls also includes production designer Eugenio Caballero, an Academy Award winner for Pan’s Labyrinth who previously collaborated with the director on The Impossible; costume designer Steven Noble (The Theory of Everything); and cinematographer Óscar Faura, who shot both The Impossible and The Orphanage for Mr. Bayona.

Ms. Atienza added, “Juan Antonio’s interpretation will bring this story into his own territory. Once again, we are making a movie with both huge technical challenges and a very intimate story that requires great sensitivity.”

River Road Entertainment is one of the leading independent production companies known for developing, producing and financing distinguished feature films and documentaries that astonish, inspire, reveal, and provoke.

Most recently, the company produced Love & Mercy, directed by Bill Pohlad. The film, which paints an unconventional portrait of Brian Wilson, the mercurial singer, songwriter and leader of The Beach Boys, premiered at the 2014 Toronto International Film Festival and will be released by Lionsgate/Roadside Attractions. River Road also partnered with Reese Witherspoon and Bruna Papandrea’s Pacific Standard to produce Nick Hornby’s adaptation of Cheryl Strayed’s bestselling memoir Wild. Directed by Jean-Marc Vallée and starring Witherspoon, that film will be released by Fox Searchlight on December 5. Currently in production is Sean Penn’s The Last Face, which stars Javier Bardem and Charlize Theron in a story about a talented and charismatic doctor (Bardem) forced to choose between his love for an American relief worker (Theron) and his dedication to saving lives in war-torn African nations.

Participant Media (http://www.ParticipantMedia.com) is a global entertainment company founded in 2004 by Jeff Skoll to focus on feature film, television, publishing, and digital content that inspires social change. Participant’s more than 55 films include Good Night, and Good Luck, Syriana, An Inconvenient Truth, FOOD, INC., Waiting for ‘Superman’, The Help, Contagion, and Lincoln. Participant launches campaigns that bring together government entities, foundations, schools, and others to raise awareness and drive people to take action on issues from each film or television show. Pivot (http://www.Pivot.tv), the company’s television network, is available in 45 million homes, serving passionate Millennials (18-34) with a diverse slate of talent and a mix of original series, acquired programming, films, and documentaries. TakePart (http://www.TakePart.com) is Participant’s digital news and lifestyle magazine and social action platform for the conscious consumer. Through its films, social action campaigns, digital network, and its television network, Participant seeks to entertain, encourage, and empower every individual to take action.

Its feature film business has been fueled by such recent successes as the blockbuster first two installments of The Hunger Games franchise, The Hunger Games and The Hunger Games: Catching Fire; the first installment of the recently launched Divergent franchise; Now You See Me; Warm Bodies; The Possession; Roadside Attractions’ A Most Wanted Man; and Pantelion Films’ breakout hit Instructions Not Included, the highest-grossing Spanish-language film ever released in the U.S.

Lionsgate’s home entertainment business is an industry leader in box office-to-DVD and box office-to-VOD revenue conversion rates. Lionsgate handles a prestigious and prolific library of approximately 15,000 motion picture and television titles that is an important source of recurring revenue and serves as the foundation for the growth of the company’s core businesses. The Lionsgate and Summit brands remain synonymous with original, daring, quality entertainment in markets around the world.

Focus Features (www.focusfeatures.com) makes, acquires, and releases movies from rising and established talent and filmmakers. The company is moving forward with a diverse slate of wide releases appealing to a range of moviegoers. Staying true to the company’s roots, the slate will also include several specialty films each year.