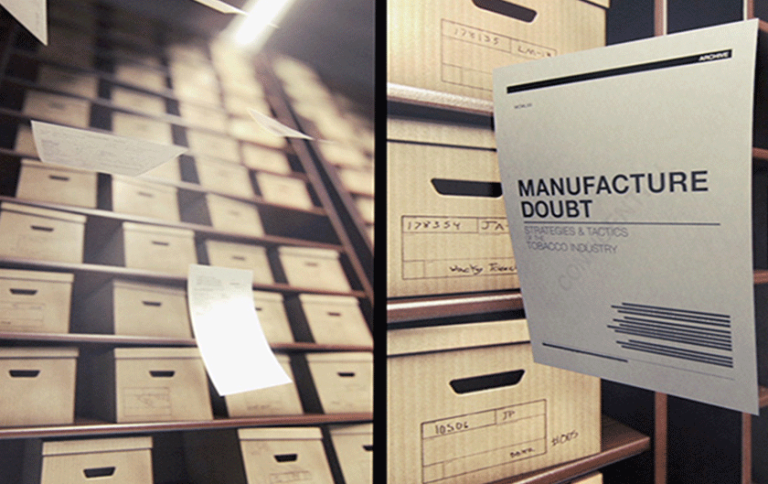 MERCHANTS OF DOUBT is presented by Sony Pictures Classics, in association with Participant Media and Omidyar Network, a film by Kenner, produced by Kenner and Melissa Robledo, executive produced by Jeff Skoll and Diane Weyermann of Participant Media, and Pierre Omidyar of Omidyar Network, and co-produced by Brian Pearle, Taki Oldham, Dylan Nelson and Youtchi von Lintel. Directors of Photography on the film include Don Lenzer, Barry Berona and Jay Redmond with music by Mark Adler. The film will be slated to be released by the end of the year.

Inspired by the acclaimed book by Naomi Oreskes and Erik Conway, MERCHANTS OF DOUBT takes audiences on a satirically comedic, yet illuminating ride into the heart of conjuring American spin.  Filmmaker Robert Kenner lifts the curtain on a secretive group of highly charismatic, silver-tongued pundits-for-hire who present themselves in the media as scientific authorities – yet have the contrary aim of spreading maximum confusion about well-studied public threats ranging from toxic chemicals to pharmaceuticals to climate change.

Kenner commented, “I was thrilled that Participant Media and The Omidyar Network were ready to back a comedy about science denial and that Sony Pictures Classics will be taking this film out into the world.  With MERCHANTS OF DOUBT, I saw a chance to show audiences a world they hadn’t seen before—a chance to lift the curtain and expose how these messages are crafted and sold to the public.”

“MERCHANTS OF DOUBT is that rare triple threat: well made, entertaining and destined to immediately become part of this volatile cultural debate.  We look forward to bringing this outstanding film to the world,” added Sony Pictures Classics.

Diane Weyermann, EVP of Documentary Films at Participant Media stated, “Robby’s terrific film FOOD, INC is one of Participant’s most successful, impactful documentaries, and we anticipate audiences will also embrace MERCHANTS OF DOUBT.  Sony Pictures Classics had been tracking MERCHANTS OF DOUBT since the beginning and we’re thrilled they will be taking this provocative film out to the world.” Jeff Ivers negotiated the deal for the film on behalf of Participant Media with Sony Pictures Classics.

Michael Barker and Tom Bernard serve as co-presidents of Sony Pictures Classics—an autonomous division of Sony Pictures Entertainment they founded with Marcie Bloom in January 1992, which distributes, produces, and acquires independent films from around the world.

Omidyar Network is a philanthropic investment firm dedicated to harnessing the power of markets to create opportunity for people to improve their lives. Established in 2004 by eBay founder Pierre Omidyar and his wife Pam, the organization invests in and helps scale innovative organizations to catalyze economic and social change. Omidyar Network has committed more than $709 million to for-profit companies and non-profit organizations that foster economic advancement and encourage individual participation across multiple initiatives, including Consumer Internet & Mobile, Education, Financial Inclusion, Government Transparency, and Property Rights www.omidyar.com.