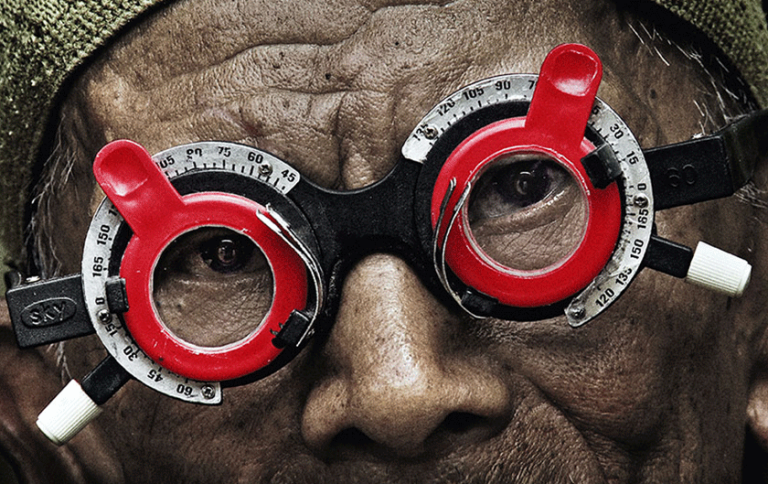 LOS ANGELES and AUSTIN (August 27, 2014) – Drafthouse Films and Participant Media announced today they have jointly acquired all U.S. rights to Oscar®-nominated director Joshua Oppenheimer’s The Look of Silence, executive produced by Oscar-winner Errol Morris (The Fog of War), Oscar-nominee Werner Herzog (Encounters at the End of the World), and Emmy®-nominee André Singer (“Little Dieter Needs to Fly”), and produced by Oscar-nominee Signe Byrge Sørensen. The Look of Silence is the companion piece to Oppenheimer’s 2014 Academy Award®-nominated documentary The Act of Killing, and explores the Indonesian genocide and its terrifying legacy from the victim’s point of view, following one man on his search for the truth as he confronts his brother’s killers.

“When I watched The Act of Killing, I thought I might not ever see another documentary quite as powerful,” said Alamo Drafthouse and Drafthouse Films founder Tim League. “Joshua Oppenheimer’s stunning new film, The Look of Silence, is resounding proof that I was wrong.”

Diane Weyermann, EVP, Documentary Films at Participant Media commented, “The Look of Silence is a haunting story about a people who were written out of the history books, and Participant is proud to work with Joshua and Drafthouse to bring their story to American audiences.”

Master documentarians Werner Herzog and Errol Morris decided to support the film by serving as its executive producers after viewing a rough cut. Morris called the film “One of the greatest and most powerful documentaries ever made. A profound comment on the human condition.” Herzog has said it is “profound, visionary, and stunning.”

Director Joshua Oppenheimer added, “Reuniting with the passionate, resourceful, and tireless team who worked with us on The Act of Killing is a dream. We are thrilled to be back with old friends and deeply grateful to Errol and Werner.”

Through Joshua Oppenheimer’s work filming perpetrators of the Indonesian genocide, a family of survivors discovers how their son was murdered – and the identity of the men who killed him. The perpetrators live just down the road, and have been in power ever since the massacres. The family’s youngest son, an optometrist, seeks to bring the past into focus, asking how he can raise his children in a society where survivors are terrorized into silence, and everybody is intimidated into celebrating the murderers as heroes. In search of answers, he decides to confront each of his brother’s killers. The killers still hold power, so each encounter is dangerous. The former executioners respond with fear, anger, and naked threats but he manages these encounters with dignity; asking unflinching questions about how the killers see what they did, how they live side-by-side with their victims, and how they think their victims see them. Through these confrontations, audiences get a sense of what it is like to live for decades encircled by powerful neighbors who are also murderers of their children. The Look of Silence does something virtually without precedent in cinema or in the aftermath of genocide: it documents survivors confronting their relatives’ murderers in the absence of any truth and reconciliation process, while the murderers remain steadfastly in power. The deal was negotiated by Cinephil’s Philippa Kowarsky for Signe Byrge Sorensen and Final Cut For Real, James Emanuel Shapiro for Drafthouse Films, and Jeff Ivers for Participant.

Born in 1974 in the U.S., Joshua Oppenheimer is based in Copenhagen, Denmark, where he is a partner at the production company Final Cut for Real.  Oppenheimer has worked for over a decade with militias, death squads and their victims to explore the relationship between political violence and the public imagination. Educated at Harvard & Central St Martins, his award-winning films include The Act of Killing (2012), The Globalization Tapes (2003, co-directed with Christine Cynn), The Entire History of the Louisiana Purchase (1998, Gold Hugo, Chicago), These Places We’ve Learned to Call Home (1996, Gold Spire, San Francisco) and other shorts. Oppenheimer is artistic director of the international Centre for Documentary and Experimental Film, University of Westminster.

Participant Media is a global entertainment company founded in 2004 by Jeff Skoll to focus on feature film, television, publishing and digital content that inspires social change. Participant’s more than 55 films include Good Night, and Good Luck, Syriana, An Inconvenient Truth, Food, Inc., Waiting for ‘Superman’, The Help, Contagion and Lincoln. Participant launches campaigns that bring together government entities, foundations, schools, and others to raise awareness and drive people to take action on issues from each film or television show. Pivot, the company’s television network, is available in 45 million homes, serving passionate Millennials (18-34) with a diverse slate of talent and a mix of original series, acquired programming, films and documentaries. TakePart is Participant’s digital news and lifestyle magazine and social action platform for the conscious consumer. Through its films, social action campaigns, digital network, and its television network, Participant seeks to entertain, encourage and empower every individual to take action.

More information and artwork from the The Look of Silence is available here.