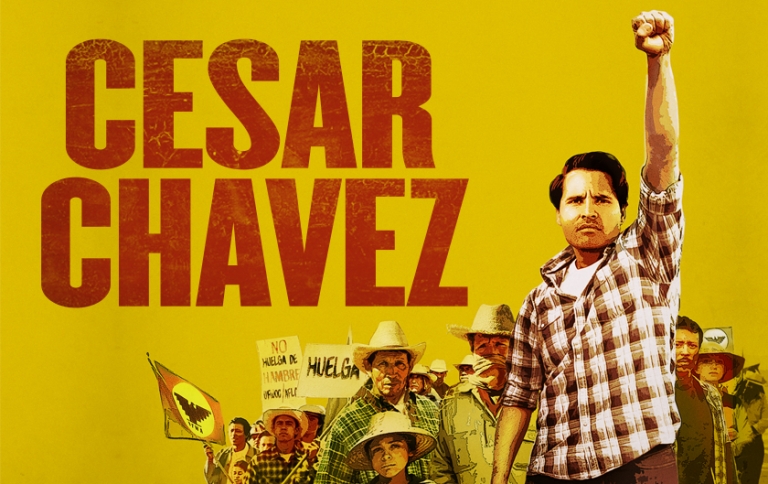 LOS ANGELES (July 21, 2014) -- In 2014, the film Cesar Chavez sparked an alliance between the Equitable Food Initiative (EFI) and global entertainment company Participant Media aimed at raising awareness about keeping food and workplaces safe and sustainable, starting in the fields where farmworkers plant and harvest our food.

When Cesar Chavez originally arrived in theaters, Participant Media leveraged interest in the film to gather over 30,000 signatures on TakePart.com in support of EFI’s efforts to implement safe food practices and provide training and fair wages to farmworkers. Now, as Cesar Chavez arrives on DVD, Blu-ray Disc™ and On Demand July 22nd, EFI is launching a new food label trustmark that will certify produce that is “responsibly grown and farmworker assured,” and help grocery shoppers quickly identify equitably-sourced food. “Just as Cesar Chavez raised awareness of the conditions of farmworkers by organizing a boycott that millions of Americans supported, we believe that consumers today can advance Chavez’ groundbreaking achievements by supporting the concept of equitable food. We are proud to join forces with EFI on this natural extension of Chavez’ work,” said Chad Boettcher, Participant’s EVP Social Action & Advocacy.

“EFI is thrilled with the results of our collaboration with Participant Media to spread the word about our ‘responsibly grown, farmworker assured’ certification,” says Peter O’Driscoll, Project Director of EFI. “Participant has demonstrated a capacity to mobilize movie-goers to act on the issues that move them on the screen. We are delighted that fans of the movie so strongly supported the farmworkers, growers and food companies working together. We hope this new label will enable consumers to find ‘equitable food’ in their retail outlets, and to use their purchasing power to encourage growers and retailers to join the effort to make our food system safer and fairer for all of us.”

Since its inception, EFI has worked with stakeholders from across the industry to develop a Standard for working conditions, pest management and food safety. EFI piloted the program on several farms, training farmworkers and teams on maintaining these standards. Earlier this year, the organization completed the first audits and certifications. The consumer-facing trustmark should appear on produce in stores within a few months; as the systems are tested and verified, the number of participating farms will increase. The trustmark is the result of a unique collaboration between the organizations behind EFI and the consumer audience; EFI surveyed people who signed the pledge hosted on TakePart.com for feedback on various versions. “What we especially like about the tagline is that it captures how many people are engaged in making food safe and workplaces decent. Growers, farmworkers, retailers, and consumers all play a role,” said O’Driscoll.

Chronicling the birth of a modern American movement, Cesar Chavez tells the story of the famed civil rights leader and labor organizer torn between his duties as a husband and father and his commitment to securing a living wage for farm workers. Passionate but soft-spoken, Chavez embraced non-violence as he battled greed and prejudice in his struggle to bring dignity to people. Chavez inspired millions of Americans from all walks of life who never worked on a farm to fight for social justice. His triumphant journey is a remarkable testament to the power of one individual’s ability to change the world. Cesar Chavez is currently available on Digital HD.

Participant is a global entertainment company founded in 2004 by Jeff Skoll to focus on feature film, television, publishing and digital content that inspires social change. Participant's more than 55 films include Good Night, and Good Luck, Syriana, An Inconvenient Truth, Food, Inc., Waiting for ‘Superman’, The Help, Contagion and Lincoln. Participant, uniquely, launches campaigns that bring together government entities, foundations, schools, and others to raise awareness and drive people to take action on issues from each film or television show.

Pivot, the company’s television network, is available in 45 million homes, serving passionate Millennials (18-34) with a diverse slate of talent and a mix of original series, acquired programming, films and documentaries.

Participant’s digital network, TakePart, is a leading source of socially relevant news, opinion, entertainment and information about ways to get involved with the issues that shape our lives. Through its films, social action campaigns, digital network, and its television network, Participant seeks to entertain, encourage and empower every individual to take action.