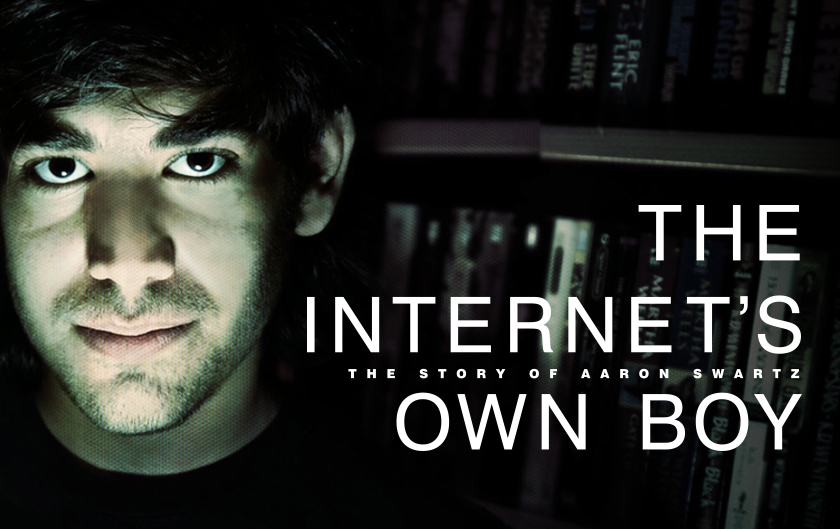 THE MULTI-PLATFORM RELEASE OF

“THE INTERNET’S OWN BOY”

On June 27th, the Documentary about Prodigy and Activist Aaron Swartz Arrives in Theaters and on All VOD Platforms for Rental

NEW YORK and LOS ANGELES (June 19, 2014) – FilmBuff and Participant Media are proud to announce the multi-platform release of their compelling new documentary, “The Internet’s Own Boy” on Friday, June 27th followed by a broadcast television premiere on Participant’s television network, Pivot, later in 2014. The film is available for pre-order today on Vimeo On Demand (www.vimeo.com/ondemand/internetsownboy) and iTunes (http://bit.ly/1pKulkX). Produced, written and directed by Brian Knappenberger, the documentary first premiered at the 2014 Sundance Film Festival before screening at the SXSW Film Festival and as the opening night selection at the Hot Docs Film Festival. Theatrically, “The Internet’s Own Boy”will open exclusively at the IFC Center in New York and at the Sundance Cinemas in Los Angeles as well as theaters in 15 other markets nationwide. The documentary will be available to rent for $6.99 on all VOD platforms including Vimeo On Demand, iTunes, Amazon Instant Video, Comcast and DirecTV and, for the first month of release, will be offered to own exclusively through Vimeo On Demand (www.vimeo.com/ondemand/internetsownboy) for $9.99. “The Internet’s Own Boy” tells the story of programming prodigy and information activist Aaron Swartz. From Swartz's help in the development of the basic internet protocol RSS to his co-founding of Reddit, his fingerprints are all over the internet. But it was Swartz's groundbreaking work in social justice and political organizing combined with his aggressive approach to information access that ensnared him in a two-year legal nightmare. It was a battle that ended with the taking of his own life at the age of 26. “We wanted to bring Aaron's story to as many people as possible, so the day ‘The Internet’s Own Boy’ debuts in theaters, we are also offering the film across a variety of digital services and platforms in a model fitting with what Aaron architected and stood for" said Brian Knappenberger, Director, “The Internet’s Own Boy.” Aaron's story touched a nerve with people far beyond online communities. This film is a personal story about what we lose when we are tone deaf about technology and its relationship to our civil liberties. Participant Media will leverage awareness of Aaron’s story to launch a social action campaign, timed to the film’s release, encouraging audiences to demand better oversight in the U.S. justice system. “The Internet’s Own Boy” was directed, written and produced by Brian Knappenberger (“We Are Legion: The Story of the Hacktivists”). Executive produced by Charles Annenberg Weingarten. John Dragonetti composed the score. This film is not rated and runs 105 minutes.

About FilmBuff Founded in 2007, New York-based FilmBuff is the leading distributor of incomparable digital entertainment.  The Company draws upon its deep relationships within the film industry to curate content that consistently informs, entertains and inspires.  FilmBuff designs innovative digital strategies to supply content to all on-demand outlets.  Serving as a bridge between filmmakers and audiences, FilmBuff actively engages in conversations with fellow entertainment lovers through its exclusive access, original content and unique voice.  Find FilmBuff content on all cable, satellite and telco services, game consoles, online retailers, wireless platforms and hardware manufacturers worldwide.  Connect with FilmBuff at www.FilmBuff.com and @filmbuff.

About Participant Media Participant Media is a global entertainment company founded in 2004 by Jeff Skoll to focus on feature film, television, publishing and digital content that inspires social change. Participant’s more than 50 films include GOOD NIGHT, AND GOOD LUCK, SYRIANA, AN INCONVENIENT TRUTH, FOOD, INC., WAITING FOR ‘SUPERMAN’, THE HELP, CONTAGION and LINCOLN. Through its films, social action campaigns, digital network TakePart.com and Pivot, its new television network for Millennials, Participant seeks to entertain, encourage and empower every individual to take action.