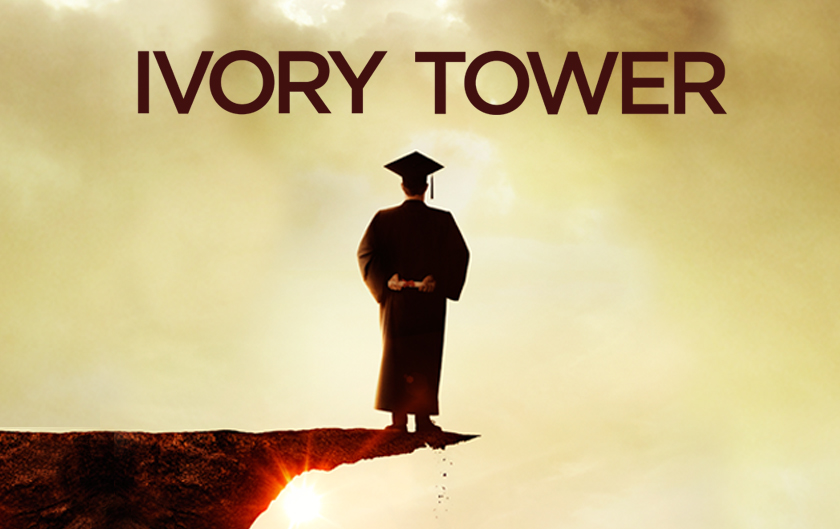 Following the film’s theatrical window, Ivory Tower will be distributed across home entertainment platforms through Paramount Home Media Distribution.  Paramount will also handle all distribution outside of the U.S.

Participant Media, part of the team behind Rossi’s previous documentary, Page One: Inside the New York Times, has a long-term commitment to focusing on the importance of education. Building on campaigns for Waiting for Superman, which Paramount Vantage released in 2010, and Teach, which aired on CBS and Pivot last fall, Participant will mount a social action campaign for Ivory Tower that will launch in support of the film’s theatrical release.

As tuition spirals upward and student debt passes a trillion dollars, students and parents ask, "Is college worth it?" From the halls of Harvard to public and private colleges in financial crisis to education startups in Silicon Valley, an urgent portrait emerges of a great American institution at the breaking point. Ivory Tower producers are Rossi and Josh Braun with executive producers Vinnie Malhotra and Amy Entelis.  Kate Novack is co-producer and Andrew Coffman is associate producer.

Diane Weyermann, Participant’s Executive Vice President of Documentary Film said, “As we saw with Waiting for Superman and Teach, stories about education drive a profound passion and intense dialogue among viewers.  After our great experience on Page One, we are happy to be working with Andrew again on this timely and inspiring film and to increase awareness of the real costs of higher education.”

“Ivory Tower unveils a number of critical truths about the state of higher education in America and we are delighted to be able to bring this important and enlightening film to audiences across all platforms,” said Syrinthia Studer, Senior Vice President, Marketing and Acquisitions, Paramount Home Media Distribution.

Peter Goldwyn, Senior Vice President of Samuel Goldwyn Films said, “We are thrilled to be working with Andrew and the team behind An Inconvenient Truth on this incredibly thoughtful and provoking film that is a must-see for every parent and student in the education system.”

“CNN Films is thrilled that Andrew Rossi's exceptional portrait of collegiate education at a crossroads will finally get the wide audience it deserves, through this remarkable team of distributors.  We are proud to partner with Participant, Paramount Home Media, and Samuel Goldwyn Films for the distribution of this feature across all platforms,” said Vinnie Malhotra, senior vice president, development and acquisitions for CNN Worldwide.

Added Rossi "Producing Ivory Tower with CNN Films has been an ideal experience, with true creative freedom and deep support. And with the dream team of Participant, Paramount and Goldwyn behind the film's social action campaign and distribution, we hope that the film will advance a crucial conversation about the value of a transformative college experience, the dangers of student debt and, more broadly, the mission that colleges should fulfill for a 21st Century society. I am thrilled to be collaborating with Participant Media and Diane Weyermann again on a project that engages another vitally important cultural institution."

The deal was negotiated by Participant COO Jeff Ivers, the Paramount Home Media Distribution acquisitions team, Ian Puente, Vice President and General Counsel for Samuel Goldwyn Films, with Josh Braun of Submarine and Stacey Wolf of CNN on behalf of CNN Films and the producers.

Participant (ParticipantMedia.com) is a global entertainment company founded in 2004 by Jeff Skoll to focus on feature film, television, publishing and digital content that inspires social change. Participant's more than 45 films include GOOD NIGHT, AND GOOD LUCK, SYRIANA, AN INCONVENIENT TRUTH, FOOD, INC., WAITING FOR ‘SUPERMAN’, THE HELP, CONTAGION and LINCOLN. Through its films, social action campaigns, digital network TakePart.com and Pivot, its new television network for Millennials, Participant seeks to entertain, encourage and empower every individual to take action.

About CNN and CNN Films

CNN Worldwide is a portfolio of two dozen news and information services across cable, satellite, radio, wireless devices and the Internet in more than 200 countries and territories worldwide. Domestically, CNN reaches more individuals on television, the web and mobile devices than any other cable TV news organization in the United States; internationally, CNN is the most widely distributed news channel reaching more than 271 million households abroad; and CNN Digital is a top network for online news, mobile news and social media.  Additionally, CNN Newsource is the world’s most extensively utilized news service partnering with hundreds of local and international news organizations around the world. CNN is division of Turner Broadcasting System, Inc., a Time Warner Company.