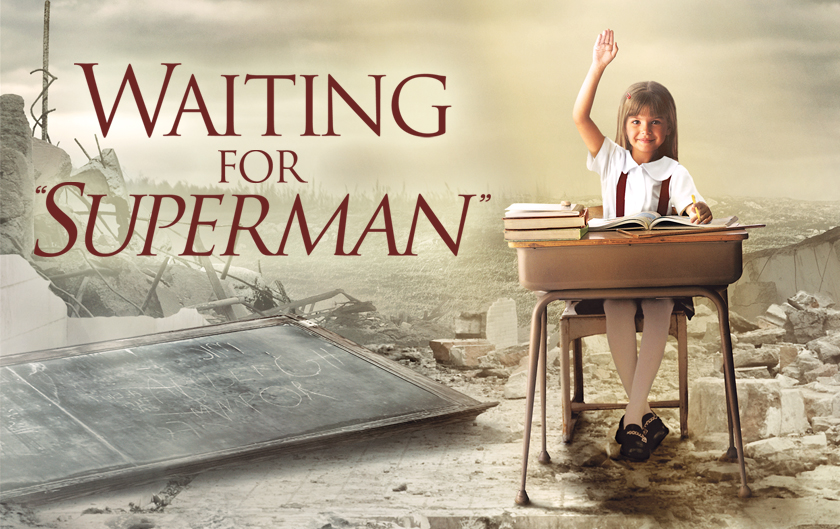 LOS ANGELES (February 25, 2011) -- Continuing the momentum of the Social Action campaign begun during the theatrical release of director Davis Guggenheim’s landmark documentary Waiting for “Superman,” Participant Media is encouraging people to purchase the DVD or Blu-ray and join thousands of people across the United States gathering for home viewing parties.  The House Party initiative hopes to continue the discussions sparked by the award-winning film about public education and encourage people to get involved in helping to improve the nation’s educational system.  In addition to over 1,000 people across the country committing to hosting screenings in their homes, Participant has partnered with a number of groups, including United Way, STAND for Children, The Boys & Girls Clubs of America, America’s Promise and the U.S. Chamber to encourage screenings and discussions in communities nationwide.  It is anticipated that over 5,000 House Parties will be held by the end of May.   To launch the initiative, Participant Media will host a national conference call with Guggenheim and producer Lesley Chilcott during which  the director and producer will address questions submitted by people via the website before the call. The conference call will take place today, Friday, February 25 at 6:00 p.m. PST/9:00 p.m. EST and everyone who signs up will also be entered to win a one-on-one phone call with Harlem Children’s Zone founder & CEO Geoffrey Canada who is featured in the film.   People hosting a screening are encouraged to register their gatherings on the film’s website at http://www.waitingforsuperman.com/action/dvd and be represented on a map tracking the nationwide events.  They can also sign up to receive a free House Party Screening kit, which will provide them with a DVD Discussion Guide, as well as popcorn, bumper stickers and action postcards that can be used at their event.   “The House Parties are a key component of Participant Media’s commitment to use the film to inspire community involvement and expand the vital conversation about public education that the movie has sparked,” said Jim Berk, CEO, Participant Media.  “The DVD and Blu-ray release allows us to reach those who didn’t have the chance to see the film in a theater and continue to engage people in demanding the highest quality education for all children.”   Called “an electrifying call to action” (Rolling Stone) and “one of the top 10 movies of 2010” (Time Magazine), Waiting for “Superman” depicts the moving and poignant struggles of real-life students and their families and the efforts of educators and reformers who are working to find viable solutions within a dysfunctional system.  The film debuted on Blu-ray and DVD on February 15th and each disc includes a $25 credit that can be donated to any classroom project listed on DonorsChoose.org.  In addition to the inspirational film, the Blu-ray and DVD feature four additional stories of real students and teachers, commentary by Davis Guggenheim and Lesley Chilcott, a conversation with Davis Guggenheim, the making of John Legend’s original song “Shine”, which recently won a Grammy for Best R&B song and was composed specifically for the film, a look at what’s changed in education since the movie was filmed and more.   Waiting for “Superman” is a Paramount Pictures release of a Participant Media presentation in association with Walden Media. The film was written by Davis Guggenheim & Billy Kimball.   About Paramount Home Entertainment Paramount Home Entertainment (PHE) is part of Paramount Pictures Corporation (PPC), a global producer and distributor of filmed entertainment.  PPC is a unit of Viacom (NYSE: VIA, VIA.B), a leading content company with prominent and respected film, television and digital entertainment brands.  PHE is responsible for the sales, marketing and distribution of home entertainment products on behalf of various parties including: Paramount Pictures, Paramount Vantage, Paramount Classics, Paramount Famous Productions, Nickelodeon, MTV, Comedy Central, CBS and PBS and for providing home entertainment fulfillment services for DreamWorks Animation Home Entertainment.     About Participant Media Participant Media (participantmedia.com) is a Los Angeles-based global entertainment company specializing in socially-relevant documentary and narrative feature films, television, publishing and digital media. Participant exists to tell compelling, entertaining stories that bring to the forefront real issues that shape our lives.  For each of its projects, Participant creates extensive social action and advocacy programs, which provide ideas and tools to transform the impact of the media experience into individual and community action. Participant’s online Social Action Network is TakePart (takepart.com). Participant's films include The Kite Runner, Charlie Wilson's War, Darfur Now, An Inconvenient Truth, Good Night, and Good Luck, Syriana, The Visitor, The Soloist, Food, Inc., The Cove, The Crazies, Countdown to Zero, Waiting for "Superman” and Fair Game.